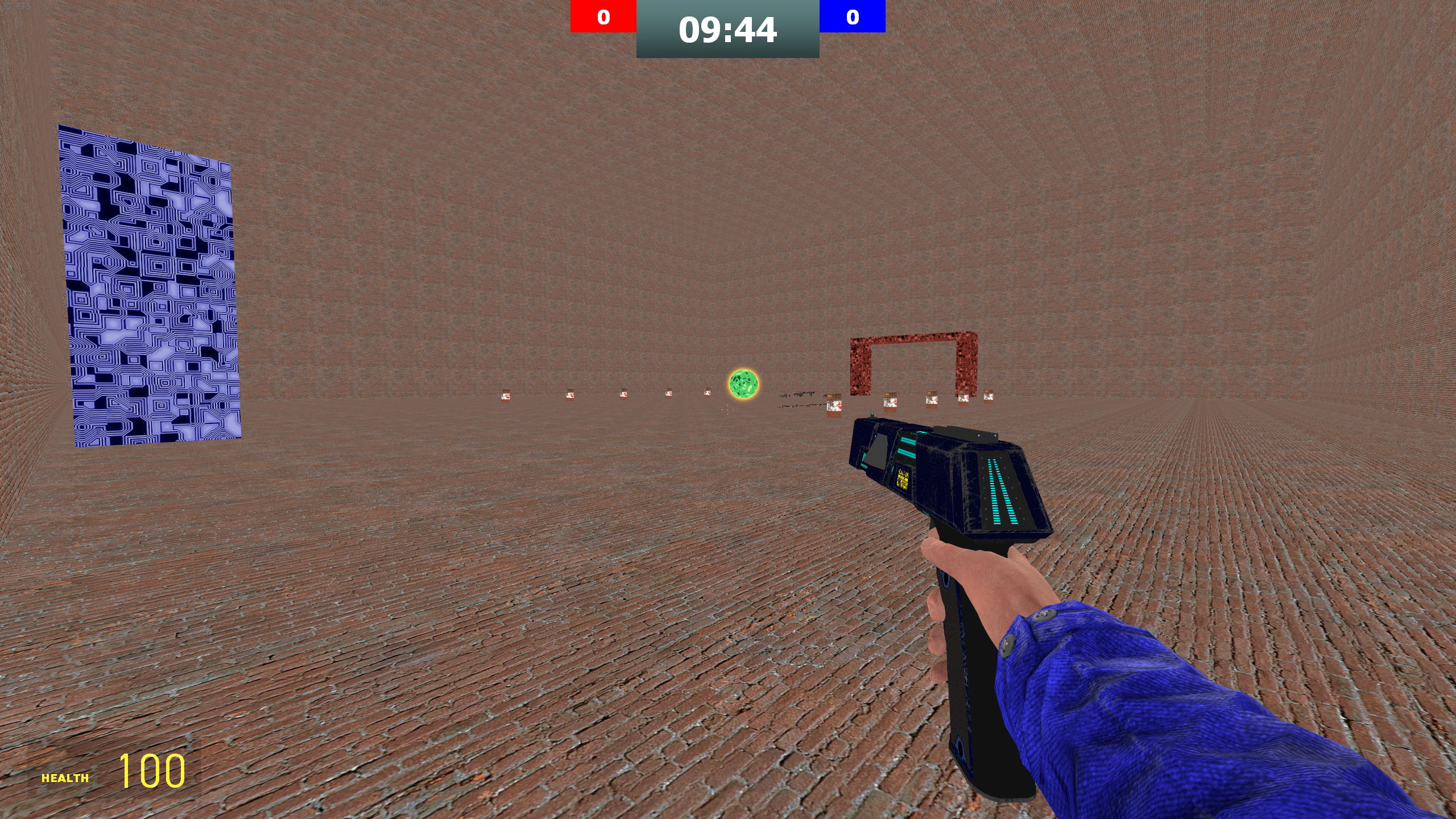 I hadn’t yet started this blog when I began working on this gamemode for Garry’s Mod. For more info on what this is, I recommend checking out the GPong Project Page to get up to speed. This post is basically the “Hello, World” for the Dev Log to explain where the progress currently sits. This (and other spin-up posts) will most likely be the longest post on the blog, since it covers everything from the start of the mod until now.

I started this mod in the latter half of 2019, and actually got the base gamemode up and running in quite short order. The first step, of course, was to make a ball, so I basically just modeled a sphere in Blender and threw it on in. Obviously, the next step was to make the ball do stuff, so I added some Goal Trigger entities. Simple. Next, I made a hook to override all the damages from the vanilla Source weapons (namely the SMG, Crossbow, AR2, and RPG) and convert them into Force values. This was all easy enough. The final step of the initial setup was to make some sort of Goalie Buff once the player stepped into the Goal area, which set the player’s mass to 50,000 and gave them temporary God Mode. Oddly enough, the hardest part of this was to get the screen effect animation running.

Unfortunately, this now brought me up to the majorly time consuming part: asset creation. As can be seen in the cover image for this post, the gamemode has existed in an extremely basic cuboid test map and not a whole lot else. So I tossed my hat into the ring of Hammer mapping. Creating a rather large, yet basic map, I had a bit of a playtest using the current code base.

As can be seen in the screenshots, this map came out to be VERY large, stretching to almost touch either edge of the map limits. Even with the player speed boost I had made during the pre-alpha phase, the major, glaring issue was obviously the travel time it took to get to either side of the map. During the playtest, we did find that the SMG grenades made for really good mobility tech, but even with the hallway shortcuts, putting pressure on the enemy goal just didn’t work because it’d be a good 20 seconds to get from spawn to the other side, making for a very boring game.

Taking these ideas into consideration, I jotted my notes and switched gears onto making some models. I had started with the Weapon Spawner, and the base geometry came out well enough, but the Photoshop texturing was coming out TERRIBLE. Not only was it low-quality, but it was taking forever to do. So, I bit the bullet and picked myself up a copy of Substance Painter. I had played with it a bit in November of 2019 as a trial, but that had long since expired.

Admittedly, this could have looked better, but as my first proper model for the gamemode, it should suffice until I get fed up enough with the texturing to redo it later. All the blue lines and panels are all emissive, and look quite nice in darkened areas.

Next, seeing to the issue of travel time in the Bunker map, I started working on the Teleporter. This model came out somewhat better than the Weapon Spawner, but could still use some work. This hasn’t been implemented into the game yet, but will be in the future. To add one last layer of polish before moving on, I made the base plate spin around.

Finally, to answer the question of mobility, I started working on the Repulsor Pistol, an idea to have an SMG Grenade style jump boost without having so much power against the ball, as the SMG Grenade tends to fling it quite far.

As you can see from this screenshot, this model came out SO MUCH better than the last two. Unfortunately, this came at the price of taking approximately 5 times as long as the previous two combined. Making this model required learning a hell of a lot more about both Substance Painter and Blender, and there were a lot of trials and tribulations in painting this. I got a lot of help from the person going by Ally Gator on Haven_Kendrick’s Discord, as she has had time in the military and gave quite a few pointers on realism and believability.

In fact, she was the one who convinced me to sell the model on the Unity Asset Store, which as of this writing, is currently Pending and has been for the past 12 days. According to their FAQ, the average review time is about 14 days, so we should be close. Also, the Unity Asset Store requires a website demonstrating the work in order to be accepted. So basically what I’m saying is that this entire blog is Ally’s fault! As this was released separately, you can view its Project Page.

And that brings us up to today. The models above are in the gamemode, the pistol has been animated and currently pretends to be firing when clicking the Left Mouse button, and the Teleporter is on-deck for the next project. Stay tuned for more updates!